Jorgeo's reef tank on a budget 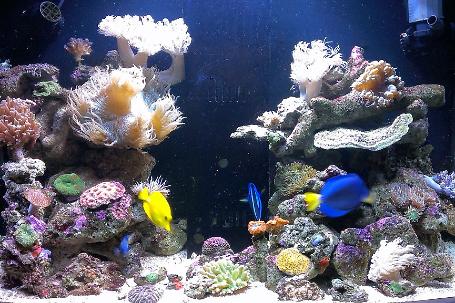 Hi, I have had a lot of tanks but never a reef tank, always thought they would be too expensive and hard to look after. After seeing a reef tank at my LFS I decided to do it. I was originally going to build a tank from scratch but after seeing the bargains on eBay and gumtree I bought second hand.
It took a few weeks of searching and a few wasted trips before I found the right tank, it came with everything I needed to start, live rock, tunze wavemaker, Eheim pumps, skimmer, chiller, heaters, 120w LED lights, heaps of test kits and red sea chemicals, it even came with fish, among them was a purple tang, all for $600.
Just letting people know u don't need to spend thousands of dollars to get started if your willing to spend a bit of time looking, problem is after u are set up and the bug has bit, that's when things get expensive.
My tank is still in its early stages and has a bit of algae, trying to get No4 & No3 down, its doing OK for its age. 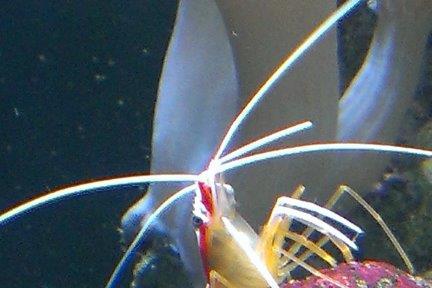 I have had fish tanks most of my life, but have never spent much or put so much time and effort as I'm doing with this tank.
My tank took all day to relocate, it was a 2 hour drive that was very uncomfortable, unfortunately I lost 2 fish but it could of been much worse, it was a hot day and I had to use the A/C to keep the water temp down, but it was all good in the end.
Although my tank was cheap it has cost me a small fortune to stock. 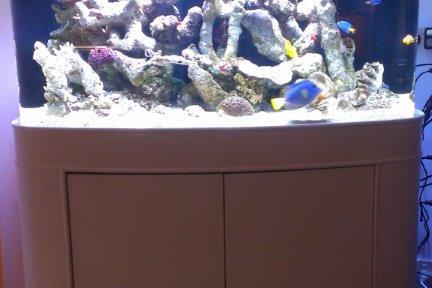 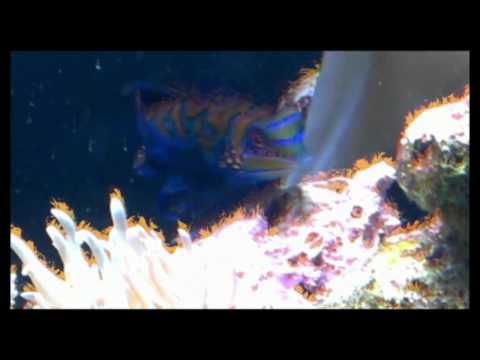 Godzilla in my tank 2 added 7 years 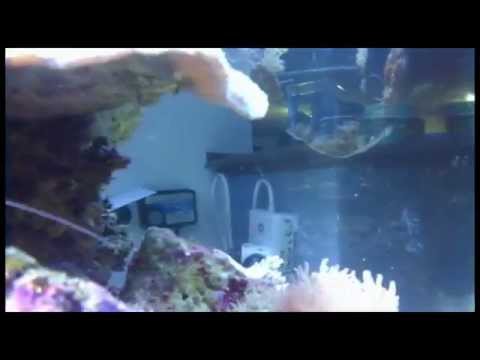 up close and personal with my cleaner shrimp added 7 years

Godzilla in my fishtank a bit of fun added 7 years

Filtration is mainly done by LR and I have a skimmer and filter sok in my sump. 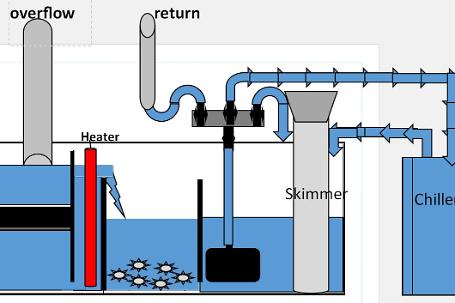 Tank uses a 120 watt LED, white & blue, I didn't think it would be enough, but corals are doing O.K. 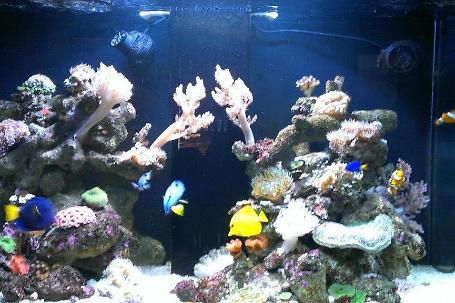 I use a Jebao WP40 set to long wave pulse and a Tunze wave pump. 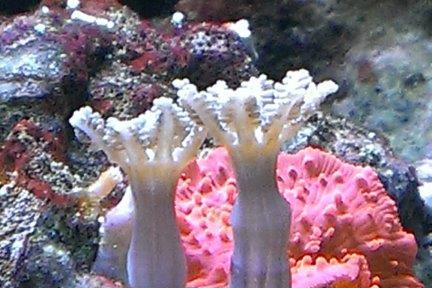 all my fish and shrimp get along even my CB shrimp, my favourite is my redline cleaner shrimp, it took months before he trusted me, but now he climbs all over my hand whenever its in the tank. 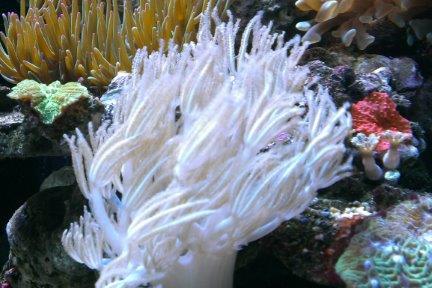 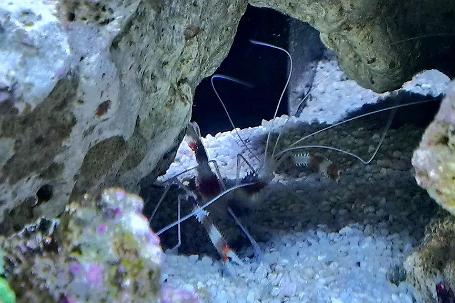 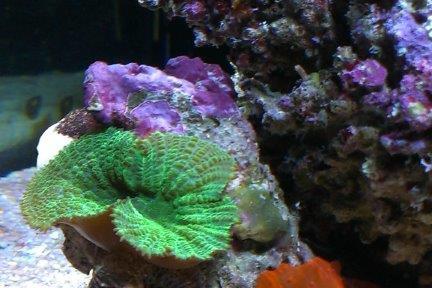 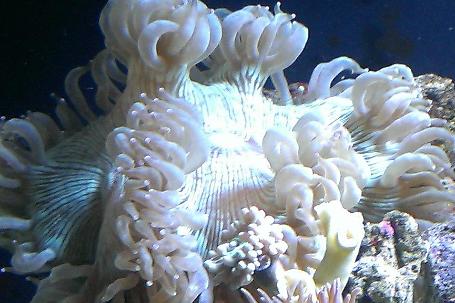 I give tank glass a quick clean daily, clean sump every 3 days,and I do a thorough clean after each water change. 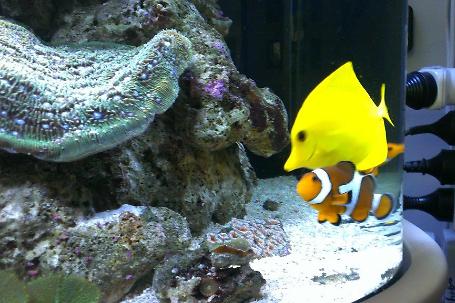 To have a self-contained living wonderland in my living room that won?t break the bank.
I would like a bigger tank soon to accommodate my Tangs. 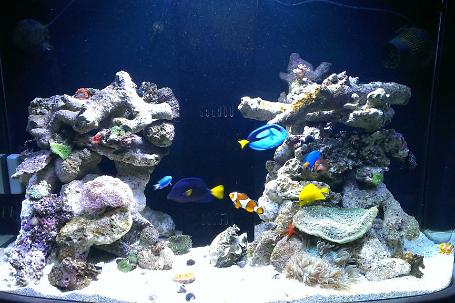 start of small, don't go all out and spend thousands of dollars until you know this hobby is for you. 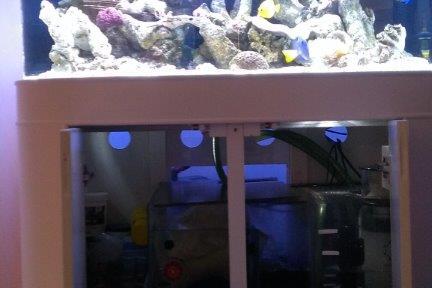 I have been lucky, no major problems, touch wood.
One regret I have is if I could go back, I would of bought a bigger tank. 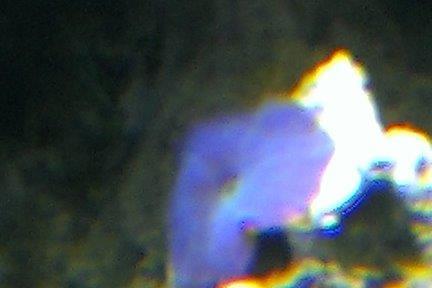 I like to thank RTAW for all the help and advise, and my local LFS, coral madness for the good products and advice. 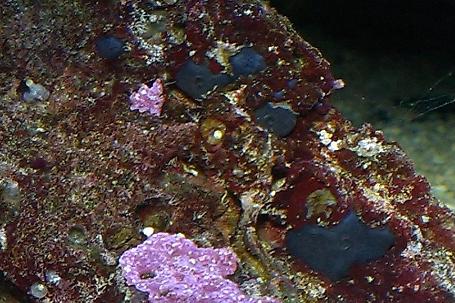