Arrgghhhh! I just got done typing my life story, as it relates to this hobby, for half an hour and when I click "Add" I get a time out message and lost it all! Now I know, write to a Word document and copy and paste here! I'll try again later.

I am a life-long aquarium (and terrarium) enthusiast. At the ripe old age of 15 years and 8 months I was granted Saturday employment at a LFS in Norfolk, Va. called Pets-N-Things. I provided customer service and "kennel care", meaning I dipped a lot of freshwater fish and cleaned a lot of cages. As I became more knowledgeable and proficient, I started helping out with saltwater livestock and reptiles and amphibians. I was fortunate growing up in that my parents always had a 10-gallon aquarium going (the kind with a slate bottom, metal trim, and a floss/carbon packed bubble filter) and entertained my necessary school "science" projects that involved fish, lizards or newts over the years. Working at the pet shop just solidified my interest in the world of glass boxes, whether filled with water or not, that contained animals.

My first marine aquarium was a 10 gallon tank with an under-gravel filter, dolomite substrate, heater, supplemental power filter, and a small Undulated Triggerfish to cycle it (yep, back then hardy "tough" fish like damsels and triggers were used). That aquarium didn't last long, not because anything happened to the trigger, but because my folks were tired of the salt creep on the bar between the kitchen and the dining room (yep, that's where they let me put it-told you they were cool!). This was back in the mid-80's. Trickle or wet-dry filters consisting of bio-balls or rolled, pad type material called DSL were the norm and VHO bulbs were the lights of choice. I don't recall protein skimmers being around much or the use of many supplements. Instant Ocean was all there was that I can remember and live rock wasn't on the radar.

I worked at the pet shop all through high school and during my 1-year stint at Old Dominion University where my goal was to major in biology. Things didn't work out at ODU and after my first year I enlisted in the USAF. I did get the opportunity to take an elective SCUBA certification class at ODU but I couldn't afford the trip to Florida to complete the open-water dives. Prior to leaving for basic training I had the opportunity to tag along on a senior class trip to the Dry Tortugas in the Florida Keys. We camped at the park and snorkeled every day - another life event that served to bolster my love of the ocean and all things tropical.

As luck would have it, my first duty assignment was Andersen AFB on Guam! Guess who finally got dive certified and experienced some of the coolest dive sites Micronesia had to offer? I even dove Guam's Blue Hole and logged my deepest ever, non-technical, dive to 124 feet!

After serving 4 years in the USAF with Security Police, it seemed logical to try to get on a local police department when my enlistment was up. This is not a short process so in the meantime I again went back to what I knew and worked for a small, local pet store chain called Pets Warehouse. I was with that company for about 2 years and left as an assistant manager. The equipment and husbandry changed drastically in the 4 years I was out of the hobby! Live rock was common place as were metal halides and kalk drips for supplemental calcium. The variety of corals and invertebrates that were now available increased drastically compared to the mainly fish that were in marine aquariums in the 80's.

I was eventually hired by the Chesapeake Police Department and had a very busy year in 1995: completing the police academy, getting married, and buying a house! As it turns out, the love of my life was also a pet enthusiast having worked at another LFS before I met her. She still fully supports my aquarium and terrarium hobbies! Although we had a 29 gallon tank in the apartment we rented prior to home ownership, it wasn't set-up long and tap water was all that we used so nutrients and pest algae were the order of the day. It had some live rock and 3 normal output fluorescent "saltwater" specialty bulbs for light.

Between 1995 and 2003 I focused on a FW aquarium and keeping and attempting to breed Knight Anole lizards. In 2003 I started to get the hankering for a reef tank as the tanks I saw at some LFS's were beautiful. That's when I found Reef Central and my research went into over-drive! We decided to set-up a 29 gallon aquarium, with a HOB overflow and old-style acrylic sump (bio-balls removed), Aqua-C Remora HOB skimmer, two normal output actinic fluorescents and a 175 w 6500k MH bell pendant. I ordered a 29 gallon "Package" from Tampa Bay Saltwater and we were off and running! I would recommend the "Package" to anyone who wanted to keep a Florida or Caribbean type bio-tope reef - we were very happy and surprised with all of the life on the LR and seemed to see something new every day.

Unfortunately, we were not prepared for Hurricane Isabel when she roared through SE Virginia in the fall of 2003. Power in my neighborhood was out for 8 days and I didn't even have a battery operated air pump, not to mention a generator. We lost everything and what did survive after the first 2 days was given to area LFS. (Needless to say, I now own many battery operated air pumps and a generator - that my wife insists is for the fridge, but she knows it's for aquariums!)

Jen (that's my wife) felt pity on me and encouraged me to set-up another aquarium, this time only bigger! Keeping in mind I was (and still am) a public servant at the time, I couldn't afford but so much and really liked the look and dimensions of the reef ready AGA 65 a local shop had. This time I used a 20l as a sump, purchased a Euro Reef Skimmer, man-made LR from Walt Smith (I think 90 lbs. - way too much), and a -ready for this- dual 400 W MH canopy with VHO actinics from a site off E-bay! My dad is quite the handy man and helped me build a canopy that supported the bulbs about 18" off the tank. Needless to say that wasn't high enough and those things put out so much heat the VHOs wouldn't even come on and the included acrylic shield started to warp and melt. What a waste of $600! 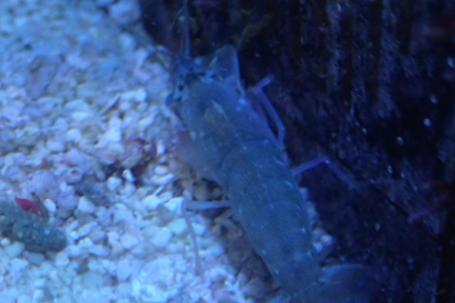 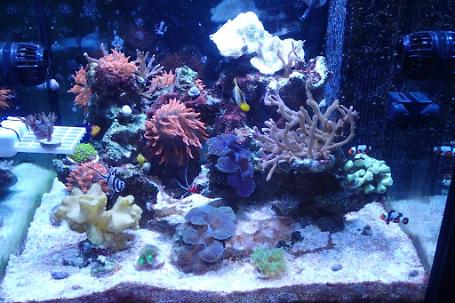 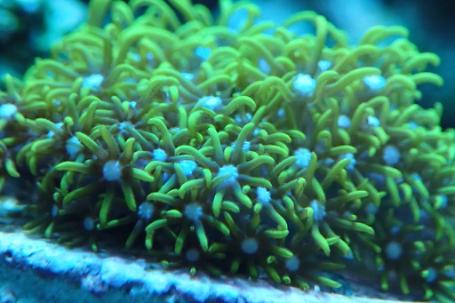 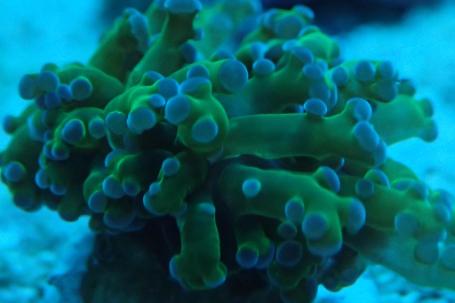 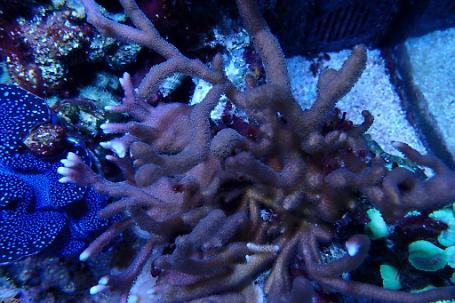 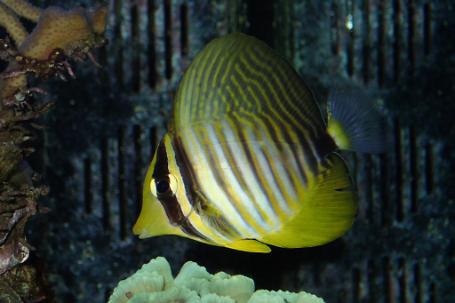 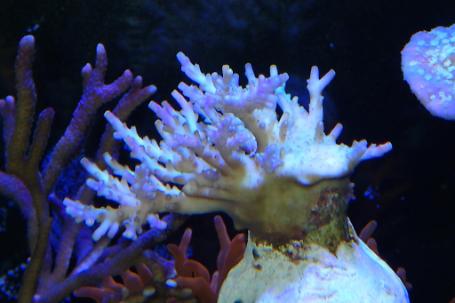 On average you perform a 7.9% water change every 13 days.