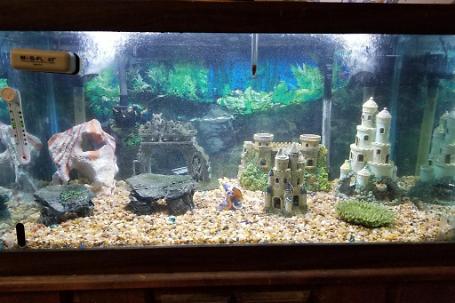 This tank was given to me by my Aunt many years ago now. She gave it to me free of charge on Christmas season as she no longer wanted it and needed it out of her house. I became the new owner. Moved it all by myself into my apartment. Still remember that night. Snowy and icy. But somehow I managed to move it from my Blazer to my apartment without destroying a thing. There were a few close calls though.

This tank has moved with me each and every time I have moved. It weighs a ton and a half I think. lol

38 activities in the last year

Got lazy with this tank. Water changes became painstaking. I have a python but in this house it wouldn't attach to anything. Since the death of the last longest living fish I have ordered parts for the python and replacing a faucet to help change this process. Maybe in time I will go and actually take care of the tank. Until I gain that responsibility the tank will remain empty.