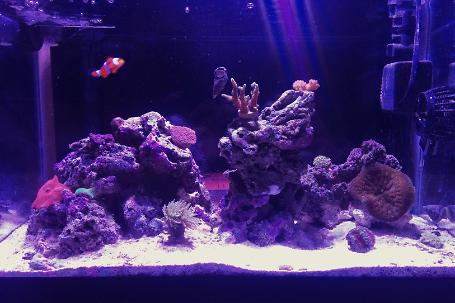 I've kept various aquariums for the better part of my life; various freshwater and species aquariums and most recently a nano reef and pico planted aquarium.

This tank is 4 years old, but became neglected due to a combination of frustration from bouts with GHA, cyano, bubble algae, and lost livestock. I made a lot of common mistakes: buying equipment on impulse, overfeeding, overstocking, taking shortcuts and moving too quickly.

For about a year and a half, I kept the tank going with no livestock, but continued topoffs and water changes in order to keep the live rock alive while I considered my options.

I've made a concerted effort over the last couple of months to revive it, while hopefully implementing some wisdom gained from my previous problems. I also think that aquaticlog.com will be an invaluable resource in helping track water parameters and changes to the aquarium and helping draw correlations between the two.

My plan, now that parameters seem to have stabilized, is a mixed reef with the possibility of SPS if I can maintain pristine water parameters.

On average you perform a 24.1% water change every 7 days.

0% total water change in May.