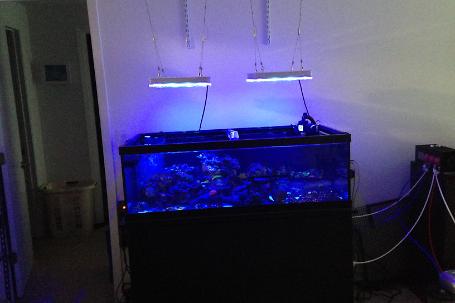 I started saltwater reefing in November of 2011 with a nano tank, since then my passion has grown and I have continually expanded the hobby, both in tank size, as well as livestock and experience

This tank was setup after a flood/power outage pushed me out of my old apartment in the summer of 2013. Due to the damage to the building we were not allowed to move back in for 3 months. I broke my lease and got a new place, but since my previous apt. was on the 7th floor I obviously could not move the existing tank (wasn't going to carry all that stuff down the stairs). Took this opportunity to upgrade to the Deep Blue 80 Frag. The tank was setup and cycled with BRS pukani rock and Live sand, and I recovered what remained of my livestock from a friendly LFS that held what survived the power outage.

Dec 2014 Showing Off the Maxspect GYRE, all vortech pumps are off added 6 years

Filtration is currently handled by 2x 7" 200micron BRS filter socks in the sump, a Skimz Oval Skimmer, and a Pax Bellum A.R.I.D. algae filter. I also add a skimz media reactor with ROX carbon as needed to polish water quality and keep it crystal clear. Between the skimmer and ARID I have been seeing decent nutrient control and with regular water changes have not had to go for any additional filtration.

Lighting started with a 32" reef breeder LED fixture that was previously over my old 33L tank. This worked for a time, but because of the additional width of this tank I was seeing lots of shadows being cast by the rockwork due to the narrow profile of the LED. I did a fair bit of research and settled on the Orphek Atlantik system. The Orphek lights have a more spread out LED pattern with a wide body that seemed like it would be the best bet for minimizing shadow on this tank profile. I have been super happy with these lights both in their performance and the customer service from Orphek.

These lights have 3 channels, a blue/actinic, a white daylight and a 'feed' channel. The feed channel is designed to stimulate chlorophyll A and B and contains a number of UV spectrum lights as well as teal and red

My schedule starts with lights on at 9am ramping up to full noon sun and ramping down to off at 11pm. This gives me an opportunity to check on the livestock as I leave for work in the morning, and a chance to enjoy the tank in the evenings. The full noon period lasts about 4 hours and has all the channels at 100%, the feed channel tapers off quite suddenly on either side, with daylight extending out a bit further and the actinic channel on for the full duration ramping up from zero and back down to zero

Flow is currently provided by a Maxspect Gyre powerhead and a rotating/oscillating return nozzle. The gyre creates a gyre flow top left to right and bottom right to left, with the return in the right corner creating some whorls and random flow patterns. I have considered adding a second gyre on the back of the tank to add some additional flow top to bottom, but this would be just gilding the lily, the single gyre provides more than adequate flow for the tank.

Tank was originally setup with a libra dosing system using BRS 2-part additives to manage cal/alk/mg, however I am now using a GEO calcium reactor. This is my first time using a calcium reactor and while I am currently pleased by its performance I will be sure to update my opinion as I gain more experience with it.