After keeping fish in the past, this is my entry back into the hobby. 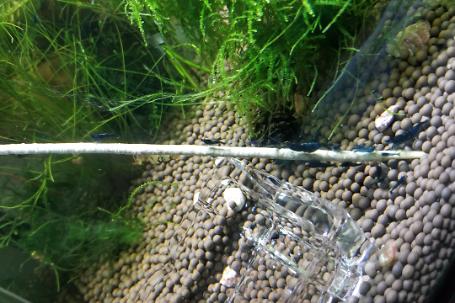 After deciding to jump back into the hobby with a planted shrimp tank, I picked out the Aqueon 8.75-gallon shrimp tank. I loved the shape of the tank with the angled glass on top. It really makes a huge difference when trying to look at the bottom of the tank, which is where most of the shrimp like to hang out. I also liked the fact that it was a complete kit so I didn't have to "start from scratch" and try to pick components after being "out of the loop" for so long.

The shrimp were sourced from a few local people from the local Facebook aquarium groups. Since then they've been breeding and multiplying on their own. The snails were stowaways that came along with the shrimp, and their population has blown up from there, as snail populations tend to do. Some people consider them pests and try to remove them, but to me they help keep the tank clean and it is fun seeing little tiny snails, and watching them grow into rather large snails.

28 activities in the last year

A lot of the inspiration came from stumbling across the Reddit /r/plantedtank then the /r/shrimptank subreddits. I never knew that micro-shrimp existed prior to this. I'd seen ghost shrimp and amano shrimp in the big-box pet stores, but never these cool little colorful shrimps. I subscribed to those subs, and the more I saw them the more I fell in love. It became my goal to setup a planted tank and find some shrimp.

My main goals right now are just keeping the shrimp happy and letting them breed and build up their colony. I have basic low-light plants in there now, but I'd eventually like to diversify it a bit and get some more unique plants.

When I first set the tank up, I used tap water that had been run through a carbon filter to remove the chlorine. After letting the tank cycle long enough (I thought) I picked up shrimp from a local breeder. In less than a week they were all dead. I had some great conversations with another local shrimp enthusiast and he gave me the advice to start with RODI water and use additives to make sure the parameters were exactly what they needed. I emptied the tank, found a local source for RODI water, and followed his advice. I let the tank stabilize again, then picked up shrimp from another local person. My shrimp have been healthy and happy since.