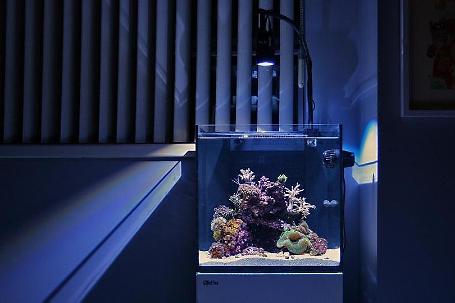 I had a patched together standard 10G tank running, and was doing very well with tons of growth and no real issues at all, but last week the AC20 and AC70 gurgled over the back, down the back of the tank and under the stand. It flowed over randomly so I never noticed anything out of the ordinary, until I stepped in the puddle one morning. So it had to come down, if anything, to save the hardwood floor.

The original plan was to take it down, move the stand, dry it out and then just put it back up. I have had plans to upgrade down the road so I figured I'd jump start that plan since I was breaking down the tank anyways.

I quickly set up an old Fluval Spec V I had sitting around and transferred everything into that, it is tight, but temporary, and called my LFS to see if they had any Reefer's in stock. They had one left. I ran up and brought it home.

One of the best things I have done in this hobby is make this water/mixing station. It makes water changes so quick and easy.

My SpectraPure (90gpd) pumps into a top mounted 15g Rubbermaid Roughneck. The float valve attached to the SpectraPure fills it nicely and cuts it off. I have 2 Hydor Koralia 240 pumps circulating the clean RO/DI water.

That's then plumbed downward into another 15g Rubbermaid Roughneck. There's 2 valves, one flows into the salt mixing tank and the other branches off so I can fill up the ATO.

In the bottom tank there's a Mag-Drive Supreme 500 for circulation and a heater. I only add salt the day before a water change so it doesn't sit around too long. It's all attached to a digital timer as well so the pumps/heaters turn on for a few hours a day so it gets some movement on a daily basis. I do a water change on Wed nights so the pumps go on Tues night and runs until I get home on Wed night so it's good to go.