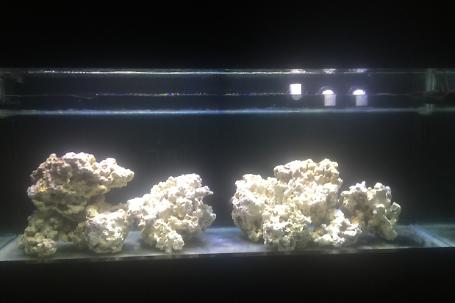 About 3 years ago while I was working from home, my daughter asked me why we can't have Nemo? I explained to her that Nemo is a saltwater fish, and we had freshwater.

About 30 minutes later, I got to thinking, which typically is a bad thing...why can't we have Nemo? I started googling saltwater aquariums, emailed a friend of mine, and by 3pm that day, I knew my 75 gallon was going to be too small.

Knowing what I know now, I would have built it differently but it works, and has a matching canopy.

I drilled the aquarium, made for a Beananimal drain system. Originally the tank was going to be in the family room, but how the floor joists were laid out, did not work. Having 1500+ lbs being supported by a single 2x10 running horizontally wasn't going to work. Into the basement it went.

I ended up getting 75lbs of Pukani rock from Bulk Reef Supply, and about 90lbs of Reef Flakes by Tropic Eden.

I cycled using pure household ammonia sold by Ace, and a week or 2 after the cycle.

Now that the cycle was done, I had to make a final decision on the light. Do I go with T5, or LED? Ultimately I ended up buying a Photon 48, and had no regrets for quite some time about it.

For filtration, I use the Pukani Rock, an Aquamaxx EM200 skimmer and a Marinepure block with filter socks.

Livestock at the moment is a Green Bubble Tip Anemone, and a pair of clowns. While my tank was cycling the first time around, I got a text about someone tearing down their tank and had a pair of clowns that needed a home. I said sure, and they went through QT for 2 weeks, and put them into the tank. To this day they havent gone near the anemone, and the smaller one, the male doesn't eat until the female gets her fill.

Future livestock will include a Yellow Tang, Kole Tang (or of the like) and a Hippo Tang. I know people will say, you can't house a Hippo in a 5' tank, but my response is, does 6" on either end make a 6' tank that much better? And the way I have my rock, they can swim around, over, and through. Spoke with numerous store owners, one of which I greatly respect, and he said it's fine, as long as the tank isn't jammed with rocks, and there's ample swimming room, it'll be fine.

Other than the tangs, a Foxface, which will end the big fish...a Midas Blenny, maybe a school of Bangai Cardinals or other type of Cardinals, possibly a firefish, maybe a goby or so. I would love Anthias, but I am unable to feed them multiple times a day. Maybe once a day, but not multiple times.

As for the corals...SPS baby.

No dosing as of yet. When the time comes, powered by a Jebao dosing pump, and will be doing BRS 2 part, and possibly Red Sea Colors. Maybe. I don't know yet.

Second, I would have gone with T5 lighting. On/Off, plug and play. proper spectrum, no tinkering. Tried and true method.

Third, I would have gone barebottom from the start. Sure the Reef Flakes look great. But they also housed so much nasty crapola that my corals the first time around really suffered. Even though my test kits all said good, the corals all were saying other things.

the third point brings me to aquatic log. I ended up tearing down the tank, removing the sand, removing the rocks, bleaching the rocks, acid bathing the rocks. Was a long day that saturday and sunday. But well worth it...I hope. I'm still looking into getting a T5 light and selling the Photon, but we'll see.