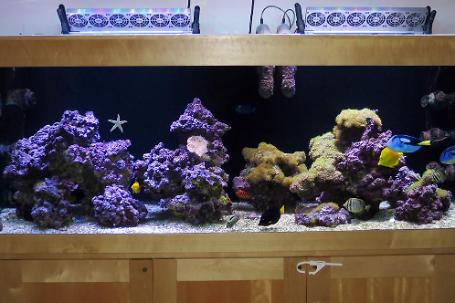 This tank was setup about 7 years ago as my very first marine / reef tank. A short time later, after having two children, I realized that my time and economy did not let me grow this large tank into a full blown reef tank at that time. Instead it has been running as a FOWLR with just a few corals, mostly green star polyps and mushrooms. A year ago I set up a smaller 200 liter reef cube and got hooked on corals again. Now its time to take the O out of FOWLR and convert my large tank to a mixed reef!

Aquarium - The main display is a standard glass tank with eurobracing. The aquarium is a 980 liter (260 US gallons) glass tank, 200 x 70 x 70 cm, in 12mm glass with black background and black silicon.

Tank stand (DIY) - The aquarium stand is a wooden stand with doors from IKEA. The tank base is about 1 meter above the floor so it provides plenty of room for my sump and equipment inside the stand. I also like the idea of being able to look straight into the tank in standing position. The stand is isolated with sound proofing foam. Two fans ventilates the stand.

Sump (DIY) - The sump is a 380 liter (100 US gallons) tank measuring 115 x 54 x 60 cm in 10mm glass with black background. The sump is placed inside the stand under the display tank. The sump is partitioned into four sections. The sump holds about 100 liter fresh water for top off. The design allow water to flow back into the fresh water reserve instead of out on the floor in case of a failure of the equipment controlling the ATO. The return pump has its own section at the right side of the sump and the skimmer has its own section above the fresh water reservoir. A water change section holds about 100 liter water and allows me to mix new saltwater while the rest of the system is running without using any external buckets.

The aquarium is running on a modern version of the Berlin method, ie filtering is handled by live rock and an efficient skimmer, combined with modern methods of mechanical filtration, phosphate absorption and dosage of carbon source. The tank contains over 120 kg (260 lbs) of live rock. Two DIY upflow filters is used for media and a rollermat filter (Theiling) helps remove particles from the water.

Ozone is supplemented a few hour each night. This makes the water clear. The ozone is mixed with water in an Ozone reactor and the water and air is post filtered in a reactor filled with 3 liter carbon (GAC). ORP is supervised using a Pinpoint ORP-meter. Additionally a UVC filter is attached to the full siphon drain pipe from the aquarium.

The light is a full spectrum DIY (2x275 W) LED fixture with DIY LED driver and DIY LED controller. The LED drivers was originally CAT4101 circuits but will be a mix of CAT4101 and Meanwell LDD-700L drivers. The LED controller is a very slim Arduino based stand alone 16 chn PWM controller with LCD, FAN control and RTC with battery backup.

A powerful Laguna pump pushes 6000 liter/h (1500 gallons per hour) to my tank and reactors through a pipe manifold (DIY).

The water movement in the tank is generated by five stream pumps each delivering a flow of 13.000 liter per hour. A controller (Tunze 7095) pulses the flow between the pumps. About half of the pumps is using the new wide flow outlets provided by Tunze.

The display tank houses 7 Tangs, 4 Dwarf Angels, 2 mandarins and a few other fish.

I try to change about 10% of water every to every second month. I create RO/DI water in the utility area of my house, and mix new saltwater directly in the sump.

Top off is controlled by an ATO. The fresh water reserve is a section inside the sump. The ATO section holds water for about 1.5-2 weeks between refills. I refill this container manually. The water is filtered by a five stage reverse osmosis unit that produces water for both my tanks. The RO has a booster pump and is capable of generating 400 gpd. The water quality is measured with an inline TDS meter on the RO.