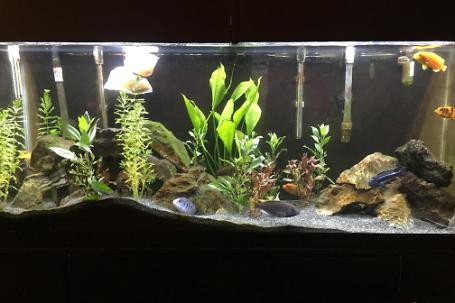 After a year of planning and saving, my cichlid tank is finally up and running. Started very small with just a 4 gallon aquarium I was able to score for ridiculously cheap and 1 very small Electric Yellow cichlid. After realizing my end goal would take longer than I expected, I took advantage of $1 per gallon sale and bought a 20 gallon tank to move my yellow into. I also picked up a Rusty, Clown, Sulfur Head, Red Zebra and Fuelleborni cichlids.

Nearly 10 months after getting the little yellow cichlid I finally had everything for this tank and got it running. After waiting 2 weeks to cycle I began moving fish over. About a hour into the move I noticed the ones I had moved over were gasping and swimming very oddly. I immediately moved them back out but it was too late and their deaths overnight caused a crash in the old tank. End result; Clown and Red Zebra were the loan survivors. I drained the new tank and refilled, allowing it to cycle another 2 weeks before moving anyone into it. After triple checking it I moved 1 lone fish in and watched it for a while as I was still unsure (and frankly still am) about what had caused the initial deaths. He did fine so I moved the other fish in and began the process of stocking back up.

I got another Rusty, Yellow, and Feulleborni, and picked up a Johanni, Daffodil, Kribensis, Compressiceps, Cobalt Blue, and Fire Mouth cichlids as well as a Syndontis Catfish. It was December at this point and I noticed the Fire Mouth wasn't doing well. I left to visit my family for Christmas and left my roommate in charge. Big mistake. Despite me telling him to watch for the Fire Mouth in case it died, he did not. The Fire Mouth died and the roommate also overfed so when I came home the tank had crashed again resulting in the deaths of about half the fish. Immediately after unloading the car I began the sad process of trying to put the tank back into shape. Yellow, Red Zebra, Clown, and Johanni made it through.

So once again I began the process of restocking settling on an Acei, and another Fuelleborni, Mbuna, Rusty and Kribensis.

Clown Labidochromis: He is my oldest inhabitant and because of that one of my favorites. He is a tough little guy having survived a tank move and 2 crashes. He likes to hide in his cave but when he comes out his white coloration makes him the star of the tank.

Red Zebra: The second oldest fish in the tank, he is also the bully of the tank. Unfortunately I haven't been able to achieve the bright red coloration they are known for and there are a couple other orange fish in the tank so he tends to get lost among the others.

Mbuna: Orange and Black, this turned out to be a female. So far she has had 4 offspring that have survived, all the same color.

Rusty Cichlid: One of my very favorites. I wasn't very sure about it when I first got one but it quickly won me over. He is very peaceful toward the others and has a beautiful coloration.

Blue Johanni: Probably my very favorite, he is an absolutely stunning fish. I just with he would show off a little more. He is unfortunately very shy.

Fuelleborni: I kind of feel bad because this guy had a lot to live up to. The previous Fuelleborni I had was one of the most beautiful fish I have ever seen (he knew he was beautiful too, loved showing off) and I was so sad when I lost him in the move. This guy is still very pretty but he just doesn't have the same iridescence to him that his predecessor had.

Electric Yellow Cichlid: I love these guys. Their color makes them such standouts in the tank and they are so peaceful. Unfortunately mine is getting bullied quite a lot and it has resulted in some pretty severe fin rot that I am now trying desperately to get sorted out before I loose him all together.

Acei: With out a doubt my least favorite fish. His color isn't at all what I had expected and he is the biggest bully in the tank, chasing and terrorizing everyone.

Pictus Catfish: These guys are so fun. They are 2 of the most active fish in the tank. I had originally tried out a Syndontis Cat but lost it in the second tank crash. I debated about getting a second one but its difficult to find in my area (not to mention expensive) and the previous one rarely came out of hiding. We got these guys in at my store recently and after doing some research I chose them to replace the Syndontis.

Gold Head Compressiceps: My newest addition, I really like the look of this guy. His color and body shape make him a great contrast to the other fish in my tank.

Feed frozen blood worms, brine shrimp, or algae flakes as a treat about once a week

I have always enjoyed having fish and have had a 95 gallon turtle tank for about 10 years but had never been super interested in the hobby. However, in 2012 I was hired as aquatic specialist for Petco. After getting hands on experience with more complex systems and the wide variety of fish, as well as doing some personal research about salt water tanks (our store didn't have salt water systems but I wanted to learn enough to help any customers that came through with questions) I quickly realized I greatly enjoyed the hobby. I toyed around with the idea of starting a reef tank but decided it would just be much too expensive at the time. So I decided to try a cichlid tank with live plants as the next best thing.

Tank Crash 1: New tank was all set up and as I began moving fish over the fish began gasping and moving about in obvious distress. Caught them again and moved them back to old tank but they didn't make it. Whats worse is they died over night and crashed the old tank resulting in the loss of almost all fish. Still not sure what happened. Assumption is some chemical leaching from the new rocks. Drained the new tank rinsed off the rocks again and refilled.

Tank Crash 2: Left town for Christmas and left the roommate in charge. I noticed a sick fish before leaving and didn't expect it to live until my return. Left instructions to keep eye on it and remove if died but didn't happen. The fish died and that combined with overfeeding by the roommate resulted in the loss of over half the fish. Moral of the story: Don't trust your roommate with the fish tank.